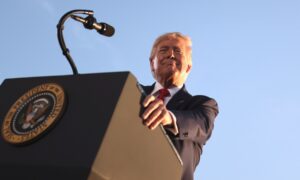 ABOARD AIR FORCE ONE—President Donald Trump said on Friday he considered Japanese Prime Minister Shinzo Abe a great friend and expressed concern over his decision to step down for health reasons.

“I want to pay my highest respect to Prime Minister Shinzo Abe … a great friend of mine,” Trump told reporters on Air Force One. “I just feel very badly about it.”

Trump said Abe loved his country very much and said he planned to call him.

Abe announced on Friday he was resigning because of poor health, his long-running battle with ulcerative colitis ending a tenure as Japans longest-serving prime minister.