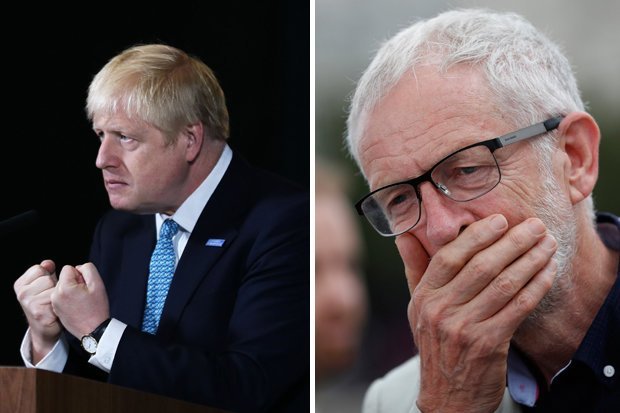 SURGE: The Tories appear to be experiencing a 'Boris bounce' (Pic: GETTY)

Since Boris Johnson became Prime Minister, the Conservatives have gained 10 points to stand at 30%, a survey by Deltapoll showed.

That puts them five points ahead of Labour at 25%, with the Liberal Democrats on 18% and the Brexit Party on 14%.

But if Labour was to drop Jeremy Corbyn as leader, the poll in the Mail of the Sunday says the party would shoot into the lead at 34%, with the Tories on 28%, the Brexit Party on 14% and the Lib Dems on 13%.

Meanwhile a Sunday Times also reported a spike for Boris, with the Tories jumping 6pts to 31%, Labour 10 points behind on 21%, the Lib Dems on 20% and the Brexit Party falling to 13%.

The results suggest Boris has won back support from the Brexit Party – which thrashed the major parties in May's European Elections.

They also indicate the recent surge in Lib Dem support has largely come from Remainers who previously backed Corbyn's Labour.

The poll comes as Mr Johnson set out an eye-catching domestic stall promising a £3.6 billion boost for left-behind towns as he sought to shift the political spotlight from Brexit.

The PM also pledged funding for a major new rail link between Manchester and Leeds, and promised action on housing and crime, despite insisting he was not preparing for a snap autumn election.

Mr Johnson said: "I want to be the PM who does with Northern Powerhouse Rail what we did with Crossrail in London.

"And today I am going to deliver on my commitment to that vision with a pledge to fund the Leeds to Manchester route.