THERESA May has slapped down calls for a second EU referendum as Labour leader Jeremy Corbyn prepares to force a no confidence vote in her leadership over Brexit. 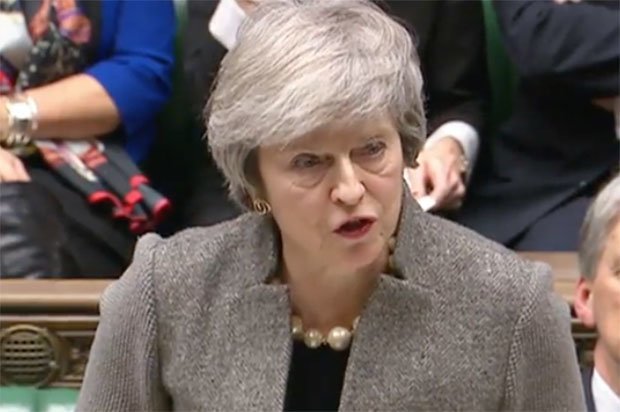 Speaking in the House of Commons, the Prime Minister will warn MPs prepared to vote down her deal that holding a new Brexit poll would do “irreparable damage” to Britains politics and democracy.

The PM told MPs to “honour our duty to finish the job” of delivering Brexit, reminding them they backed the triggering of Article 50.

She said a different Brexit deal will not “miraculously appear” after comments by European commissioner Jean-Claude Juncker said it was the “only possible” agreement.

Meanwhile, Corbyn will press for a no confidence vote against the Prime Minister if she does not set a date for a “meaningful vote” on her Brexit deal in parliament, Labour sources say.

SLAPPED DOWN: May said a new Brexit vote would cause 'irreparable damage' to politics (Pic: SKY NEWS)

A Labour source indicated the motion would be targeted at Mrs May personally, rather than the government.

The PM told MPs she has been given assurances from the EU that the backstop protocol, intended to prevent a hard border in Northern Ireland, “would not need to be triggered”.

She said there was “no plot” to trap Britain in the EU if the backstop does come into force in the event of a no-deal Brexit, as some Eurosceptic Tory MPs fear.