Corbyn said he would put the motion to Parliament “immediately” over her decision to delay the “meaningful vote” on her Brexit deal.

The dramatic move, announced in Parliament last night, came just hours after Mrs May told MPs the vote on her deal would take place on the week starting January 14 next year.

Caught by surprise by Mrs Mays statement, Corbyn appeared to rescind an earlier threat to table a no confidence motion when responding to her in the House of Commons.

But in another screeching U-turn, Corbyn has humiliated Mrs May by opting to press for the no confidence vote after all.

MP for Wakefield Mary Creagh said the vote, which is targeted at Mrs May personally, rather than the government, will take place on Tuesday evening. 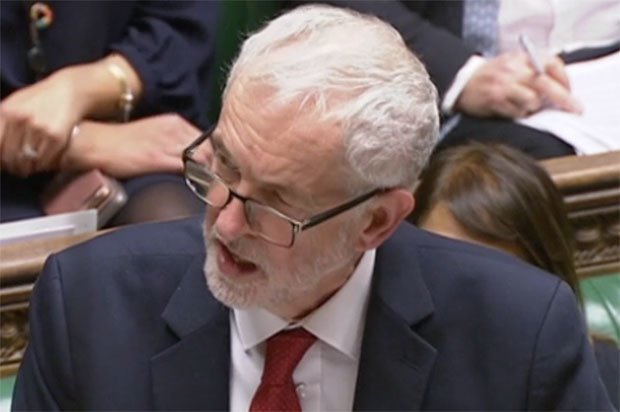 BREXIT TURMOIL: Corbyn has tabled a no confidence motion against Theresa May (Pic: DS)

His announcement was met with cheers on the Labour benches while the PM watched on stony-faced before hastily leaving the Commons.

The motion is not legally binding but defeat for the PM would further erode her fragile authority and illustrate the extent to which she could lose the Brexit deal vote in January.

If Mrs May ignores the vote, which she could do under the rules, a Labour spokesman said "it is clear that she does not believe she retains the confidence of this House".

Standing at the dispatch box, Corbyn said: "It's very clear that it's bad, unacceptable that we should be waiting almost a month before we have a meaningful vote on the crucial issue facing the future of this country.

"The Prime Minister has obdurately refused to ensure a vote took place on the date she agreed, she refuses to allow a vote to take place this week and is now, I assume, thinking the vote will be on January 14 – almost a month away.

"This is unacceptable in any way whatsoever.

"So, as the only way I can think of ensuring a vote takes place this week, I'm about to table a motion which says the following: 'That this House has no confidence in the Prime Minister due to her failure to allow the House of Commons to have a meaningful vote straight away on the Withdrawal Agreement and framework for future relationships between the UK and European Union.'
"And that will be tabled immediately, Mr Speaker thank you."

Labour MPs welcome the move, as party sources insisted it is still a matter of "when not if" Mr Corbyn brings a full vote of no confidence in the government.

“Jeremy Corbyn, following two and a half hours of fudging and obfuscation from the Prime Minister, has announced at the despatch box that it is his intention to immediately table a vote of no confidence in Mrs May,” Labour MP for Heywood & Middleton Liz McInnes tweeted.

DELIBERATION: Mrs May says there will be a 'proper number' of days for debate (Pic: GETTY)

LEADERSHIP THREAT: Corbyn has called a no confidence vote in the PM (Pic: SKY NEWS)

Corbyn said Mrs May has caused a “constitutional crisis” by delaying the vote on her Brexit deal at the last minute, prompting jeers and shouts from MPs.

The said the postponement of the vote has exposed the “chaos at the heart of this shambolic government” in a savage assessment of her handling of Brexit.

He told her: "A responsible prime minister would for the good of this country put this deal before the House this week so we could move on from this Government's disastrous negotiation.

"This is a constitutional crisis and the Prime Minister is the architect of it. She is leading the most shambolic and chaotic government in modern British history."

She addressed MPs in the wake of a bruising EU summit in Brussels last week during which European leaders largely rebuffed her calls for reassurances on her deal.

The PM told MPs she has been given assurances from the EU that the backstop protocol, intended to prevent a hard border in Northern Ireland, “would not need to be triggered”.

She said there was “no plot” to trap Britain in the EU if the backstop does come into force in the event of a no-deal Brexit, as some Eurosceptic Tory MPs fear.

"Avoiding 'no deal' is only possible if we can reach an agreement or if we abandon Brexit entirely," she said.

UNITY: Amber Rudd, who has called for parties to work together, leaves 10 Downing Street (Pic: GETTY)

In a warning to campaigners calling for a second referendum, she said it would "break faith with the British people".

But one of Mrs May's closest allies said "all options" should remain open if the deal is rejected.

Work and Pensions Secretary Amber Rudd said it would be important to find out the "will of Parliament" on how to proceed, while Business Secretary Greg Clark also appeared to back an indicative vote to find out what – if anything – MPs could support.

Asked whether he was tempted to give MPs a range of options to vote on, Mr Clark told BBC Radio 4's Today programme: "I think, obviously, it's important, once the Prime Minister has finished her negotiations with other European leaders and the Commission, that Parliament votes on that."