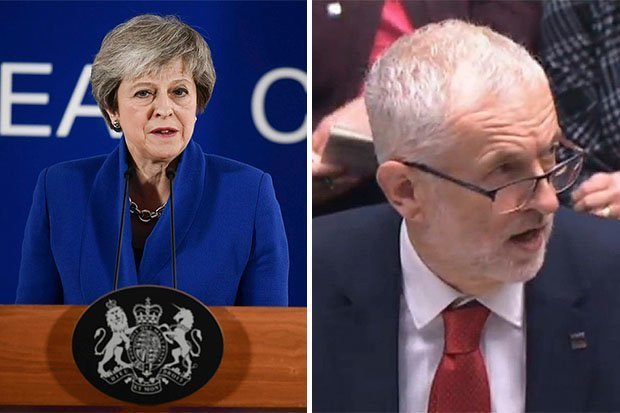 The Prime Minister is embarking on a whirlwind few days of campaigning to and lobbying MPs to back her deal to leave the EU.

Last night, leaders of the other 27 member states approved the deal struck by May's negotiators.

But the true test lies ahead with the parliamentary maths not currently in the PM's favour ahead of a proposed vote on December 12.

Labour, the Lib Dems and the SNP have vowed to oppose the deal, while a right-wing cabal of about 50-60 Tory eurosceptic MPs, including Jacob Rees-Mogg, have said they will vote it down.

“[We must] examine this deal in detail, to debate it respectfully, to listen to our constituents and decide what is in our national interest”

Not withstanding a few Labour rebels who might lend Mrs May their support, she faces a Commons defeat unless she can persuade MPs to think again.

The Democratic Unionist Party says it will review its parliamentary pact with the Conservatives – which props up Mrs May's government – if the deal is approved by MPs.

Labour leader Jeremy Corbyn has said his party will oppose the deal, calling it "the worst of all worlds".

He has said he will "relish" debating Theresa May's deal on the TV.

The Daily Telegraph reports how the PM will dramatically change her stance on debating after refusing to do so before last year's General Election.

Mrs May has pledged to put her "heart and soul" into a two-week push to convince MPs to back the terms of the UK's withdrawal from the EU and its future relations with the bloc.

Parliament will decide whether to accept or reject the package next month, in a vote which is likely to be on December 12.

Later, Mrs May will tell the Commons in a session expected to start at about 3.30pm, Mrs May will say that backing the deal would bring an end to the uncertainty surrounding Brexit.

"Our duty as a Parliament over these coming weeks is to examine this deal in detail, to debate it respectfully, to listen to our constituents and decide what is in our national interest," she will say.

She will say, after chairing a meeting of her cabinet on Monday morning, that she is "absolutely" sure there is no better deal on offer.

On Sunday, Jean-Claude Juncker, the head of the European Commission, said anyone in Britain who thought the EU might offer better terms would be "disappointed" because this was the "only" deal.