The Prime Minister rolled with the punches as she told MPs in the House of Commons that her proposals for leaving the EU were a “significant” step in the right direction.

Facing opposition from all sides – including on Tory MPs – Mrs May was accused of leaving the Brexit negotiations in a “shambolic mess” and costing her party millions of voters.

"I am confident that this takes us significantly closer to delivering what the British people voted for in the referendum,” she said in parliament at PMQs.

"We will take back control of our borders, our laws and our money, leave the Common Fisheries Policy and the Common Agricultural Policy while protecting jobs, security and the integrity of our United Kingdom."</span>

The PM today faces a make-or-break cabinet meeting in which she will attempt to secure the backing of ministers for her draft divorce deal with the EU.

Ahead of the crunch meeting, EU sources have revealed details of the Brexit deal hammered out by negotiators in Brussels.

UNDER ATTACK: Theresa May fended off criticism about her Brexit deal proposal (Pic: SKY NEWS) 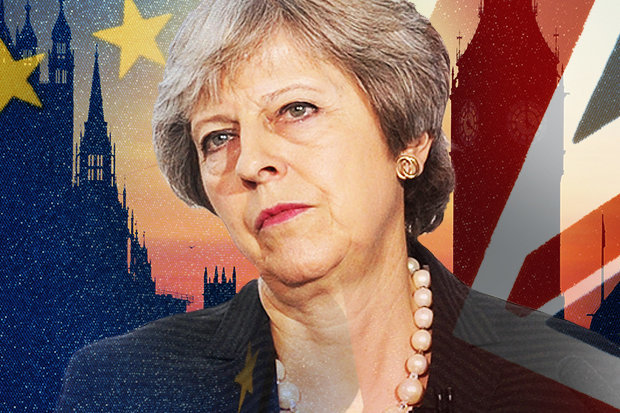 DEAL OR NO DEAL: EU sources have revealed details of the divorce deal (Pic: DS)

Under the technical Brexit agreement, Britain and the EU will decide if a new deal to ensure an open Irish border is necessary in July 2020 – six months before the transition period ends at the end of 2020, the sources said.

If a deal cannot be struck, Britain would have the option of extending the transition period once, possibly until the end of 2021 – leaving Britain tied to the EU for another year.

A second option involves a "bare-bones" customs arrangement that would cover all of the UK, thereby avoiding a hard border on the island of Ireland.

JUDGEMENT MAY: Theresa May will present her Brexit deal to her cabinet today (Pic: GETTY)

However, in this scenario, Northern Ireland would be aligned more closely with the EU's customs rules and production standards, the diplomatic sources said in Brussels.

Downing Street has not responded to reports about the deal, understood to involve the UK remaining in a customs union and committing to a "level playing field" on EU rules.

The plan is likely to enrage Democratic Unionist Party MPs, who have already confirmed they will not support a deal that involves different arrangements for Northern Ireland and the rest of the UK.

In a series of warnings to Mrs May, DUP MPs and leader Arlene Foster this morning threatened to snub her “humiliating” deal, putting her chances of securing parliamentary approval for the divorce deal in peril.

MAKE-OR-BREAK: Theresa May may have to go back to the drawing board (Pic: GETTY)

Sir Jeffrey Donaldson, chief whip of the party which props up Mrs May's minority administration in the Commons, warned that the deal "has the potential to lead to the break-up of the UK", adding: "That is not something we can support."

The fraught issue of the Irish border – and how to prevent checks that could compromise security – has been a major sticking point of the negotiations since the 2016 referendum.

Last night the PM pleaded with her cabinet ministers to act in “the national interest” and back her compromise deal with the EU.

After two years of protracted negotiations, EU and UK officials finally drafted an withdrawal agreement that Mrs May will present to a special cabinet meeting today.

“The EU will retain all the controls”

But tensions over the divorce deal have reached fever pitch today after a reported briefing by a senior Brussels advisor suggested the EU "will retain all the controls".

A leaked diplomatic note, obtained by The Times, suggested that Sabine Weyand – deputy to EU chief negotiator Michel Barnier – had told ambassadors that the UK "would have to swallow a link between access to products and fisheries in future agreements".

"They must align their rules but the EU will retain all the controls. They apply the same rules. UK wants a lot more from future relationship, so EU retains its leverage."

Initial reaction to Mrs Mays deal does not bode well for the fate of Brexit, with MPs from all parties expressing opposition.

SHOWDOWN: Theresa May will try to convince her cabinet to back her Brexit agreement (Pic: GETTY)

Leave-backing Conservatives including Boris Johnson and Jacob Rees-Mogg called on ministers to reject the proposed agreement, which they fear could lock Britain in the EU's customs union indefinitely.

“This means super-Canada impossible. Cabinet must live up to its responsibilities & stop this deal,” Johnson tweeted.

At Westminster, speculation over possible resignations focused on Brexit-backing ministers such as Penny Mordaunt, Andrea Leadsom or Esther McVey.

In a stinging assessment of the PM, he described her as "not just the worst prime minister I've ever seen but perhaps the most dishonest one as well".