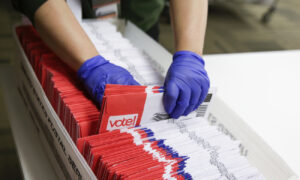 The Texas Supreme Court ruled on Wednesday that “a voters lack of immunity to COVID-19” is not a physical disability that qualifies people to vote by mail.

The court agreed with Texas Attorney General Ken Paxton, who has argued that only a physical illness or disability that prevents voters from going to the polls should qualify an individual to vote by mail.

Judges decided that the risk of contracting the virus alone does not meet the states qualifications for voting by mail, noting that the decision to apply to vote by mail based on a disability is the voters and that they were confident clerks “will comply with the law in good faith.”

“We agree with the state that a voters lack of immunity to COVID-19, without more, is not a disability as defined by the Election Code,” the court wrote (pdf). “But the state acknowledges that election officials have no responsibility to question or investigate a ballot application that is valid on its face.”

The decision is a loss for the Texas Democratic Party and voting rights groups who had pushed for expanded mail voting during the CCP virus pandemic and filed lawsuits in both state and federal courts on the matter, winning temporary victories in lower courts.

In its ruling on Wednesday, the court said the Texas Democratic Partys definition of disability was overly broad and such an interpretation would enable things like “being too tired to drive to a polling place” to count as a physical condition.

“It would swallow the other categories of voters eligible for mail-in voting,” the judges said. “We agree, of course, that a voter can take into consideration aspects of his health and his health history that are physical conditions in deciding whether, under the circumstances, to apply to vote by mail because of disability. We disagree that lack of immunity, by itself, is one of them.”

Paxton applauded the courts decision in a statement issued on Wednesday, noting that, “In-person voting is the surest way to maintain the integrity of our elections, prevent voter fraud, and guarantee that every voter is who they claim to be.”

“I applaud the Texas Supreme Court for ruling that certain election officials definition of disability does not trump that of the Legislature, whRead More From Source
[contf]
[contfnew]