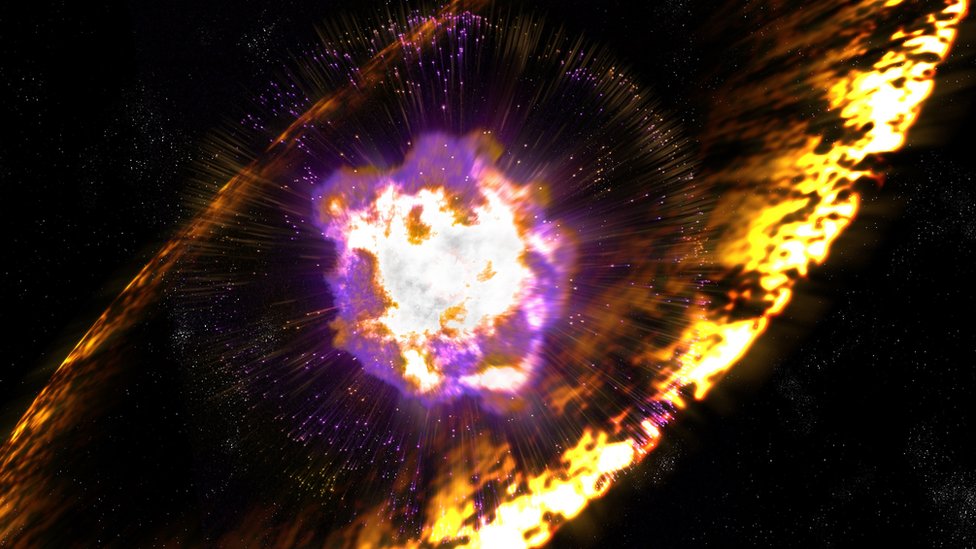 Supernovas occur when a giant star runs out of energy. As it runs out of fuel to keep burning, the star expands massively before collapsing under its own gravitational pull.

When it does, it releases a huge explosion which sends gas, debris and particles in all directions of the cosmos.

Now, scientists say there is evidence that distant supernovas could be detected here on Earth.

Mr Brakenbridge revealed that carbon-14, also called radiocarbon, is a carbon isotope which is only found in trace amounts on Earth.

It is created when cosmic rays bombard the atmosphere of our planet.

However, trees can pick up radiocarbon, so by analysing tree rings, scientists can tell if there has been an increase in radiocarbon.

If there is, it means that a nearby star has released an abundance of cosmic rays.

“There’s generally a steady amount [of radiocarbon] year after year.

“Trees pick up carbon dioxide and some of that carbon will be radiocarbon.

“We’re seeing terrestrial events that are begging for an explanation.

“There are really only two possibilities: A solar flare or a supernova. I think the supernova hypothesis has been dismissed too quickly.”

Mr Brakenbridge put his theory to the test by drawing up a record of all nearby supernovas in the past 40,000 years.

Scientists know if a supernova has occurred by the nebula the dead star leaves behind.

Of the closest supernovas studied, Mr Brakenbridge saw a spike in radiocarbon in tree ring record shortly after.

For example a star in the Vela constellation exploded roughly 13,000 years ago, and shortly after there was a three percent spike in radiocarbon levels on Earth.

Mr Brakenbridge continued: “What keeps me going is when I look at the terrestrial record and I say, ‘My God, the predicted and modelled effects do appear to be there’.”

Some scientists believe a giant nearby star known as Betelgeuse could be about to supernova.

At the turn of the year, the star began dimming in brightness, leading some to claim that it is about to blow.

Betelgeuse is only 642 lightyears from Earth, so the increase in radiation could prove to be disastrous.

Mr Brakenbridge said: “We can hope that’s not what’s about to happen because Betelgeuse is really close.”