The Russian deputy PM responsible for the defense industry has said that a ban on rocket-engine sales to the US is undesirable because it provides funds to Moscow for R&D, but such sanctions would be manageable if theyre imposed.

“You know this engine that we are supplying to the United States, the NK-33. We have made a decision to sell these engines that are not really something modern and use the money that we get from these sales to develop the newest engines. In reality, Russia gets more profit from this project than the United States,” Dmitry Rogozin said in his Tuesday interview with RBC television.

“Americans are still using our Soyuz spacecraft, we continue to cooperate on the International Space Station and train their crews at our Zvyozdny Gorodok center and at the Baikonur launching facility. But can we just stop this cooperation? Yes, we can,” Rogozin added.

“However, we should always weigh up all the pros and cons. We should distinguish pure politics that can sometimes even lead to shooting oneself in the foot and economic pragmatism,” the Russian official said.

Rogozin emphasized that the Russian rocket engine corporation would fulfill any order issued by the government, but noted that it would be better if space research remained outside politics. 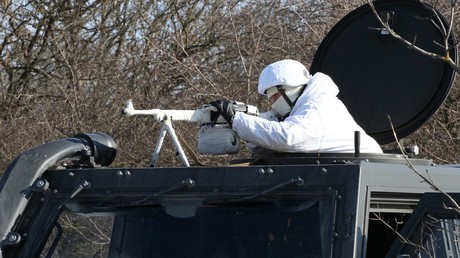 His comments came after Russian Lower House MPs last week drafted a bill detailing a possible response to the latest round of anti-Russian sanctions imposed by Washington. The proposed measures include the suspension of all cooperation with the US in the space and nuclear spheres, a ban on several categories of US imports, including agricultural produce, pharmaceuticals, tobacco, alcohol and extending the list of US citizens subject to personal sanctions such as visa bans and asset freezes. Another somewhat unexpected step proposed by Russian MPs was to suspend the powers of any copyright held by US citizens or companies, including the intellectual rights to software.

On Monday, the State Duma decided that it would hold the first hearing into the countersanctions bill on May 15.