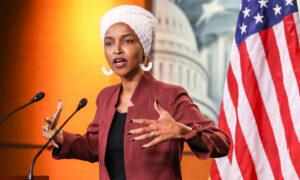 Rep. Ilhan Omar (D-Minn.) said she believes Tara Reades sexual assault claim against former Vice President Joe Biden, but would still vote for him in the upcoming election if it means preventing a second term for President Donald Trump.

“Theres a lot of unsavory stuff. It is troubling, I do believe Tara Reade, I believe its important for us to give space for women to come forward and share their stories,” Omar said in an interview with British newspaper The Sunday Times.

“It takes years and years for sexual assault survivors to come forward. Justice can be delayed, but it should never be denied.”

Omar said that if it were up to her, Biden wouldnt be the Democrats nominee for the November election, but noted that she would vote for him against Donald Trump.

Following criticism over her comments in the interview, Omar on May 25 wrote in a tweet that “believing survivors” is consistent with her values and added that the Sunday Times interview was conducted on May 6 and that the “quotes arent always in context.”

“Believing survivors is consistent with my values,” she wrote. “Yes, I endorsed against Biden and I didnt pick him as our nominee. With that said, in this interview I did on May 6, we talked about that and quotes arent always in context. I will vote for him and help him defeat Trump.”

The Minnesota congresswoman didnt provide further details on the context of her quotes.

Reade filed a report with police on April 9, in which she said she was a victim of sexual assault, but did not name Biden. The court filing stated, “Subject-1 disclosed that she was the victim of a sexual assault which was committed by Subject-2 in 1993.”

She told The Associated Press that the former vice president and presumptive 2020 Democratic presidential nominee pushed her against a wall in the basement of an office building on Capitol Hill in 1993 before sexually assaulting her. At the time of the incident, Reade was working for Biden while he was a U.S. senator representing Delaware, his home state.

Reade is one of several women who came forward in early 2019 to accuse Biden of inappropriate touching, hugging, or kissing. In April last year, Biden collectively addressed the allegations from the seven women in a Twitter post in which he pledged to “be more respectful of peoples personal space,” but has denied Reades claims against him.

Speaking to MSNBC in an interview earlier this month, the former vice president said he didnt remember Reade and that anyone who believed her allegations “probably shouldnt vote for me.”

“Well, I think they should vote with their heart, and if they believe Tara Reade, they probably shouldnt vote for me. I wouldnt vote for me if I believed Tara Reade,” Biden said. “Look at Tara Reades story. It changes considerably. And, I dont want to question her motive, I dont want to question anything other than to say the truth matters. This is being vetted, its been vetted, and people, scores of my employees over my whole career. This is just totally, thoroughlRead More From Source
[contf]
[contfnew]