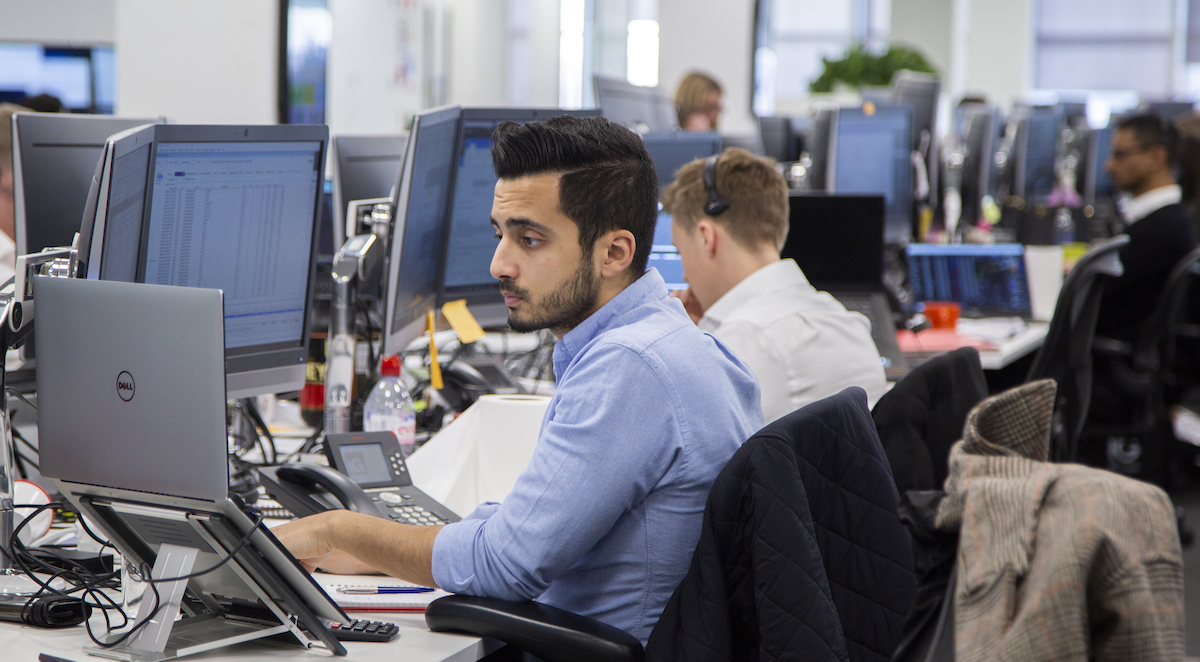 FTSE 100 index closed marginally in positive territory on Wednesday after a quiet session, with utility giant SSE (LON:SSE) the top riser after it posted preliminary results.

"It has been a lacklustre session today as there was an absence of new major news," noted David Madden, market analyst at London-based spread better CMC Markets.

"Yesterday it was announced that Dexamethasone, a low-dose steroid, performed well in clinical trials as a possible treatment for Covid-19. A team from Oxford University is heading up the trials, and the drug lowered the fatality rate of Covid-19 patients."

In the US, trade was muted and mixed as investors had few catalysts to turn to. The Dow Jones Industrial Average shed 34 points to 26,354, while the S&P 500 was near flat.

Back to London then, and the top riser on Footsie was energy group SSE, which saw shares spark up 9.14% to 1,385p as underlying operating profits from continuing operations for the year to end March rose by 37% to £1.5bn.

Londons traders seem to be hanging on to the wider rally in global markets as investors hope for a swift economic recovery from the coronavirus crisis.

While the equity markets are still looking somewhat healthy, there was less good news for British housebuyers today as Nationwide said it will be tripling its minimum deposit level to 15% for first-time buyers in order to protect them from negative equity amid a decline in house prices.

The move followed data from the building society which showed that house prices had declined by 1.7% in May, the steepest monthly fall since 2009 during the height of the financial crisis.

As expected, the US market opened higher on Wednesday as trader optimism continued despite jitters around a second wave of coronavirus infections.

Despite the positive open, it wasnt all good news across the Atlantic as new data showed that new US house builds in May had fallen short of expectations, while some also raised fears that a second wave of coronavirus cases could put another brake on new construction activity.

US markets are expected to follow Europes lead and move higher on Wednesday as investors continue to prioritise hopes of economic recovery above creeping reports of new outbreaks and infection rate surges in several countries.

Traders on Wall Street seem to still be garnering optimism from the prospect of a US$1 trillion infrastructure spending package from the Trump administration as well as recent data showing an upswing in retail sales.

However, rising infections in several US states such as Arizona, Florida and Oklahoma and fresh outbreaks in China and New Zealand may keep any bullish activity restrained.

Back in London, the FTSE 100 had moved little in the early part of the afternoon session and was 38 points higher at 6,281 shortly before 12.30pm.

As the morning portion of Wednesdays session drew to a close, the FTSE 100 had added to its initial gains and was up 40 points to 6,283 at around 11.40am.

Leading the blue-chip risers into lunchtime was energy group SSE PLC (LON:SSE), which jumped 9.4% to 1,388p after it announced that its underlying operating profits from continuing operations for the year ended March 31 rose by 37% to £1.5bn.

“Stock markets continue to be driven by the hunt for yield, a decade-long exercise thanks to the slump in bond yields. SSEs dividend remains a key attraction, which helps to explain the surge in the shares this morning following its results. Utilities remain in high demand across the globe, and even a smaller payout than last year has not diminished the attractiveness of the firm to investors”, said IGs chief market analyst Chris Beauchamp.

B&Q owner Kingfisher PLC (LON:KGF) was also on the rise, up 6.3% at 216.3p, as the company unveiled a spring back in sales in April despite suffering a hammering in its first quarter as a result of the UKs pandemic lockdown measures.

On the currency markets, the UKs inflation data seemed to have done little for the pound, which in late-morning was down 0.1% at US$1.2555 against the dollar.

The UK is also not the only economy to see inflation fall close to stagnation, with eurozone inflation having also fallen to 0.1% in May from 0.3% in April, with some countries in the currency bloc seeing overall deflation.

Heading into mid-morning, the FTSE 100 had added slightly to its initial gains and was trading 29 points higher at 6,272 at around 10.35am.

One blue-chip firm making headlines was HSBC Holdings PLC (LON:HSBA) after the bank revived plans to cut around 35,000 jobs after previously putting the strategy on hold during the coronavirus pandemic.

According to reports, the bank made the choice to restart the redundancies after it saw its first quarter profits plunge 48% in April as it girded its loins for expected loan losses from the impact of the pandemic around the world.

The job losses form part of a large restructuring through which the bank is looking to save around £3.5bn.

The decline was mostly caused by a fall in fuel prices and lower costs for recreational and culture goods, mainly games, as well as restaurants and hotels. Upward pressure was seen from food and non-alcoholic beverages.

One silver lining of falling inflation is that it may help to retain consumer purchasing power amid declining earning power, with average earnings falling 0.9% year-on-year in April.

The EY ITEM Club said they expected inflation to fall back further in the coming months, possibly reaching as low as 0.2%, while lower oil prices and weak economic activity are likely to limit any upward movement in the near term.

EY also said that the drop in inflation reinforced their belief that the Bank of England will “provide more stimulus for the economy” when it meets on Thursday, most likely through another £100bn of asset purchases. However, they remained doubtful that the central bank will choose to implement negative interest rates and instead retain rates and their current record low of 0.1%.

The FTSE 100 defied the early predictions to stave off a bout of profit-taking and open in positive territory on Wednesday.

However, Asia forgot the script as traders were hit by jitters over a potential coronavirus second wave, Korean sabre-rattling, weak Japanese trade data, and escalating tensions on the India-China border.

On the potential for a re-emergence of the virus, Jeffrey Halley, analyst at OANDA, said: “A lockdown of Beijing would be a Wuhan on steroids, being a governmental and commercial centre of China, and much more massive on any measure then Wuhan. The economic implications would be profound in China, and by default, the rest of Asia.”

Returning to London, Wednesday was a day for Boohoo.com (LON:BOO) to show its financial and commercial resilience. The online fashion retailer romped 10% higher in early trade after it unveiled a 45% rise in quarterly revenues.

While the company is listed on AIM, with a market capitalisation of £5.3bn it would romp into the FTSE 100 if it ever wanted to sever its ties with the junior market.

“e-commerce was already becoming a big part of our lives, but the pandemic has accelerated the move, so prospects are looking good for the online fashion company,” said David Madden of CMC Markets.

“The outperformance of tech stocks in the past few months has really stood out, as the firms were able to continue operating in the lockdown, and seeing as Boohoo is essentially an online-only fashion house, it should emerge from the pandemic in a strong position. On the other side of the coin, high street retailer are likely to be under even more pressure, so no doubt Boohoo will take advantage of that,” he added.

On the Footsie itself, SSE (LON:SSE) was the star performer with the energy giants shares up 8.2% after it put in place a plan to sustain dividend payments after reporting a significant drop in profits.

Pelatro PLC (LON:PTRO) has said it is “confident of delivering a performance in line with expectations for 2020” after the customer engagement software specialist reported an increase in its revenue visibility for the year. In a trading update to be delivered at the companys AGM on Wednesday, the company said its activities had been “minimally impacted” by the coronavirus pandemic and that demand for its solutions had “not flagged. As a result, Pelatro said its revenue visibility for 2020 had increased to US$5mln with annual recurring revenue (ARR) rising to US$4.7mln.

ReNeuron Group PLC (LON:RENE) has received regulatory approvals in the US and UK to expand its phase IIa stem cell studies in people with the degenerative eye disease retinitis pigmentosa. In the same announcement, investors were told the company would focus its in-house activities on the retinal disease programme, while also developing its exosome-based technology. This, ReNeuron chief executive Olav Hellebø said in the statement, provided the company “with significant near-term opportunities to deliver value-enhancing data and commercial partnerships”.

Frontier IP PLC (LON:FIPP) said a joint project between it and the University of Cambridge to tackle gum disease has received a £52,891 grant from the National Biofilms Innovation Centre (NBIC). The proof-of-concept award will support an eight-month project to explore the potential of origami-like DNA nanostructures to disrupt the dental plaque biofilms formed by P.gingivalis, the bacterium responsible for gum disease. Built around the work of Dr Ioanna Mela, the investigation will also attempt to identify at least one DNA nanostructure to take forward into commercial development in partnership with industry.

Chariot Oil & Gas PLC (LON:CHAR) has highlighted its continuing work to advance the Anchois gas field, offshore Morocco, to define the project and unlock debt financing. Posting its full-year 2019 results, the company confirmed that completion of pre-FEED work for the gas field is the key strategic focus for the group through the remainder of 2020. It is working to progress concept testing, selection and definition, along with engineering modelling and design. Meanwhile, commercially, it is aiming to secure heads of terms agreement with potential offtake partners.

TomCo Energy PLC (LON:TOM) has raised £1.5mln of new capital from a share placing, with the funds earmarked for the Greenfield Energy joint venture in Utah. The group sold 375mln new shares at a price of 0.4p each, with the number of new shares representing 136% of its current share capital. The placing was arranged by broker Turner Pope Investments and investors will additionally receive one share warrant for every two placing shares they purchase – exercisable at 0.8p over the next two years. TomCo has established the Greenfield Energy LLC joint venture vehicle with engineering partner Valkor LLC to pursue the development of an oil sands plant.

Tekcapital PLC (LON:TEK) the UK intellectual property investment group focused on creating marketplace value from university technology, has said its portfolio company Belluscura PLC is making good progress with its 510K premarket submission to the US Food & Drug Administration (FDA) though it has been impacted by coronavirus (COVID-19) associated external supply chain issues which has increased the scarcity of certain key components, increased lead times, and reduced capacity at part manufacturers and testing facilities. The group said Belluscura is in the process of completing the final surety tests and anticipates it will receive 510K clearance in the second half of 2020. Belluscura is focused on developing novel oxygen-based treatment platforms that can be adapted and applied in a wide range of markets beyond those traditionally applicable to a single product or product liRead More – Source
[contf]
[contfnew]