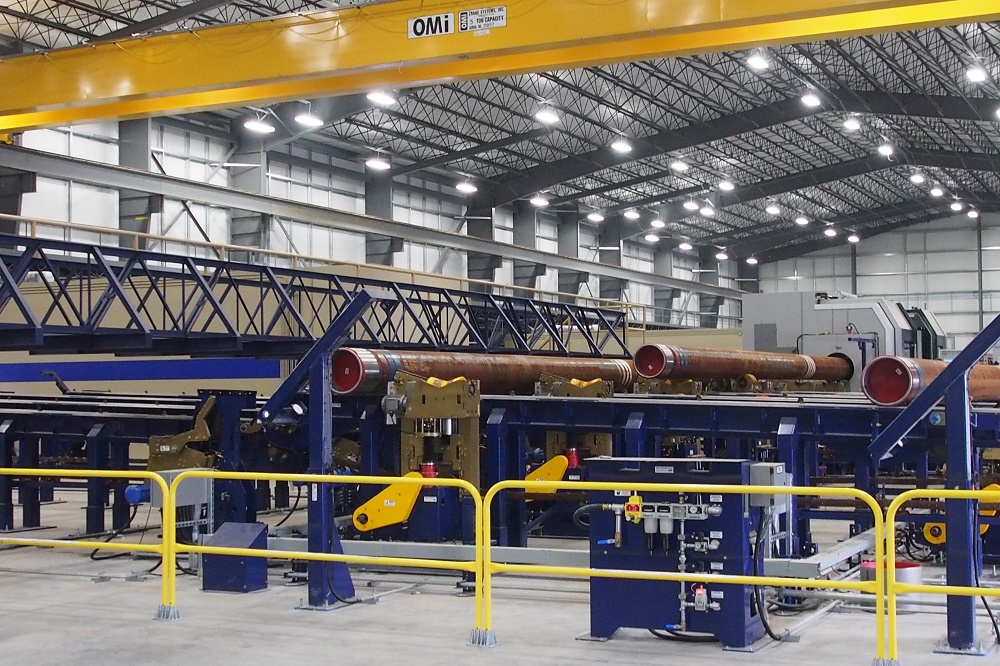 Continued supply chain disruptions resulted in another strong contraction in the manufacturing sector, according to the Chartered Institute of Procurement & Supply (CIPS).

Duncan Brock, the group director of CIPS, said output in May fell at its fourth-fastest rate in the near 30-year survey history.

The May revision to the UK manafacturing purchasing managers index was little different to the flash estimate – moving to 40.7 from 40.6.

???????? UK Manufacturing #PMI rises to 40.7 in May (April: 32.6) to signal a further sharp downturn, but the pace of contraction eases from April's record. Output, new orders and employment all fell sharply again amid #COVID-19 restrictions. Read more: https://t.co/ety9bOTOmZ pic.twitter.com/dcI0JrUAXM

“With new orders from home and abroad drying up for the third month in a row, company owners watched helplessly as the result of factory shutdowns, raw material shortages and furloughed staff continued to eat away at their operations. With no new pipeline of work to fulfil, purchasing dropped at one of the fastest rates for three decades as companies focussed their attention on completing any work in hand with current stocks of materials and with what little capacity remained in factories,” Brock said.

“Worries over safety for returning staff and repairs to broken supply chains will be uppermost in business minds, and are obstacles to be overcome before real recovery can begin. Uncertainty remains the watchword for the months ahead,” he added.

10.00am: Minor revision to May manufacturing PMI

The IHS Markit/CIPS UK manufacturing purchasing managers index (PMI) for May was revised marginally upwards from the flash estimate.

The PMI reading was revised to 40.7 from the flash estimate of 40.6, and was up from 32.6 in April. A level below 50 indicates a contraction in activity.

“Those who typically see the glass half empty will note that the UK manufacturing sector remained mired in its deepest downturn in recent memory. Output, new orders and employment fell sharply again in May as restrictions to combat the spread of COVID-19 caused further widespread disruptions to economic activity, demand and global supply chains,” said IHS Markits Rob Dobson.

“However, the glass-half-full perspective is one where the rate of contraction has eased considerably since April, meaning – absent a resurgence of infections – the worst of the production downturn may be behind us. Pressure on manufacturers should ease further as lockdown restrictions are loosened, customers return to work and global activity restarts,” Dobson said, adding that the UK seems “set for a drawn-out economic recovery”.

9.30am: Mounting trade tensions take the gloss off the Footsie's flying start

Blue-chips in London have come off the top on reports that China is to stop importing some US soya beans.

The Footsies advance was spearheaded by Associated British Foods PLC (LON:ABF), which was up 6.4% at 1,937.5p after it said early trading indicators from the recently re-opened Primark stores have been both “reassuring and encouraging”.

8.30am: Positive start to the week

The FTSE 100 was in bounce-back territory in early trade on Monday after Fridays triple-digit losses, buoyed by a positive start to the trading week in Asia.

The positivity was provided by President Trump, who opted for a restrained and considered response to Beijings clampdown on Hong Kong.

The Hang Seng provided the pull for the rest of the world with index staging a relief rally that bumped it up 3%.

Closer to home, British Airways owner IAG (LON:IAG) flew to the top of the UK blue-chip index with a 5.6% gain after the Lufthansa board accepted amendments to its proposed bail-out, paving the way for industry-wide state aid.

After several days of heavy selling activity after the downgrade of its bonds to junk status, Rolls Royce (LON:RR.) received a little love with its shares nudging 3.8% higher.

The miners, led by Anglo American (LON:AAL), were in demand early on as the latest batch of data from China pointed to a poor but not disastrous economic performance in May for the worlds second-largest economy.

Remember, the fortunes of the natural resources firms are closely allied to the state of the Chinese construction sector.

Zoetic International PLC (LON:ZOE) said it has signed a multi-state distribution agreement with a new partner, BettermentRS, to market its Chill brand of cannabidiol (CBD) products. The cannabis products firm said the deal, which will see BettermentRS distribute Chill products among its network of outlets, is the latest development from Zoetics partnership with US firm Ox Distributing.

IQ-AI Limited (LON:IQAI) shares climbed on Monday after the companys subsidiary, Imaging Biometrics (IB), was awarded a US$2.57mln, five-year grant from the National Institutes of Health (NIH) – National Cancer Institute (NCI). The company said the funding will begin on July 1 with the primary purpose of optimising and validating multi-vendor quantitative perfusion tolls for the prediction of brain tumour response to therapy on a patient-specific basis.

Strategic Minerals PLC (LON:SML) has been awarded US$21.9mln in damages and costs, exclusive of additional interest. The decision of the arbitrator relates to a dispute centred around the companys Cobre magnetite operation. The award comprises liquidated damages of US$4.2mln loss of profits of US$14mln, punitive damages of US$3.6mln, and arbitration costs of US$23,660.

Feedback PLC (LON:FDBK) has revealed that Bleepa, its flagship imaging-based medical communications platform has achieved a CE Mark for Europe. Feedback said its directors' believe Bleepa, which allows clinicians to access medical-grade images through smartphones, tablets and desktops, is the only communication platform to address the UK market that has met Medical Devices Directive certification requirements. In a statement, Tom Oakley, the chief executive officer of Feedback said: "We believe that Bleepa is the future for communicating about patient care and is already changing the way in which clinicians discuss cases and process patients through the hospital system. The CE mark is an important milestone in its commercialisation and sets Feedback apart from other providers."

Thor Mining PLC (LON:THR)(ASX:THR) has entered into an exclusive option to acquire 100% of the shares in American Vanadium Pty Ltd, a private Australian company, with interests in uranium and vanadium focussed projects in Colorado and Utah in the United States of America. The company is also raising A$970,000 to facilitate the deal, including A$130,000 from Metal Tiger PLC (LON:MTR). American Vanadium Pty Ltd has 100% interests in 199 contiguous claims in the Uravan Mineral Belt in south-western Colorado, and 100 claims in south-eastern Utah approximately 40km north of the town of Moab.

Bahamas Petroleum Company PLC (LON:BPC) has posted full-year results highlighting the explorers relatively strong financial performance, as it awaits a hotly anticipated drill programme that was delayed amid the coronavirus (COVID-19) pandemic. Financial results for the twelve months ended December 31, 2019, confirmed BPC finished 2019 with US$11.2mln of cash. Subsequently, the company has further supported its funding position with an £8mln financing facility with a Bahamian private family office investor and the establishment of a separate Bahamian domiciled mutual fund to specifically investing BPC shares.

Tissue Regenix Group PLC (LON:TRX) said its OrthoPure XT product has been awarded a CE mark following a single-arm, non-comparative, prospective study undertaken over three years. The regenerative medical devices specialist said the CE mark has been awarded for revision of the anterior cruciate ligament following re-rupture and also permits use for the reconstruction of other knee ligaments, including multi-ligament procedures following trauma.

Braveheart Investment Group PLC (LON:BRH) said its subsidiary, Paraytec, and Sheffield University are to press ahead with the development of a proposed rapid coronavirus (COVID-19) test. The fund management and strategic investment group first alerted the market to the potential collaboration on 6 May when the Aptamer Group was also in the mix as a project participant; the project will continue without Aptamers involvement, Braveheart said.

AFC Energy PLC (LON:AFC) has announced it is to test its alkaline H-Power fuel cell technology at one of construction group ACCIONA's sites in Spain. ACCIONA is one of Spain's renewable energy leaders as well as being a construction group and is looking at ways to decarbonise construction across Europe, said AFC. Diesel generation from construction sites is a significant contributor to poor air quality, said AFC, and is likely to be increasingly regulated and enforced by governments. The trial will take place in early 2021 with both hydrogen and ammonia used for comparative fuel evaluation.

Faron Pharmaceuticals Oy (LON:FARN, First North:FARON) has said it will share previously published clinical data on its lead cancer drug at a leading industry conference. Safety and efficacy results from the MATINS trial are to be shared at the American Society of Clinical Oncology annual meeting, which is being held as a virtual event this year. The ASCO presentation will show Farons precision cancer immunotherapy Clevegen was well-tolerated without dose-limiting toxicities. A total of 30 people with advanced solid tumours who had exhausted all standard options took part in the first part of the phase I/II MATINS trial. The company said recruitment for part II was underway with patients undeterred by the coronavirus outbreak. Being assessed at three different dose levels are groups with nine different cancers and three separate colorectal cohorts.

OptiBiotix Health PLCs (LON:OPTI) ProBiotix Health business has inked a distribution deal in the UK that will help expand the market for two of its key products. The non-exclusive agreement with Cambridge Commodities (CCL) covers the speciality ingredient LPLDL and the finished dietary supplement CholBiomex3 CCL is a supplier of nutritional ingredients to major UK retailers and supplement companies. OptiBiotix said the tie-up extends the commercial reach of LPLDL into new application areas where CCL has “specific sector expertise”, such as food and beverage, sports nutrition, health & wellbeing and beauty.