Who is Esther McVey?

Esther McVey, 51, is a Conservative Party politician from Liverpool.

She served as Secretary of State for Work and Pensions from January 2018, until she stepped down this morning after the Brexit deal draft proposal was revealed.

McVey has served as Member of Parliament for Tatton since 2017, and was previously MP for Wirral west from 2010 until 2015.

Before entering into the world of politics she was a TV presenter and business woman. 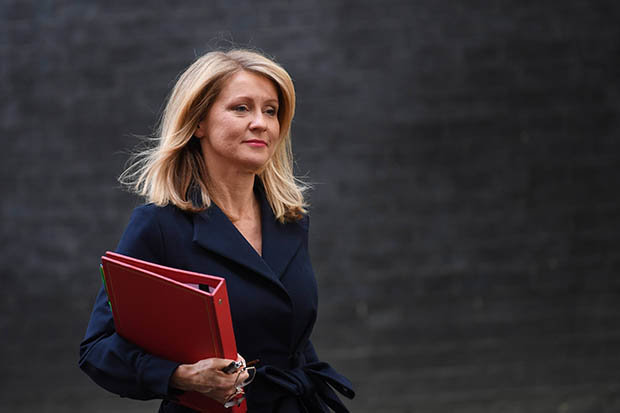 Brexit news: Who is Esther McVey? Why did she resign? What did her resignation letter say? (Pic: EPA)

Why did Esther McVey resign?

The ex-work and pensions secretary said the Brexit deal “does not honour the result of the referendum”.

She even said the withdrawal draft treatment the integrity of the UK, and believed it would “bind the hands” of the current and future government in trade negotiations.

McVey took to Twitter to reveal her resignation letter in full, addressed to the Prime Minister.

Along with scans of the letter, she wrote: “Earlier this morning I informed the Prime Minister I was resigning from her Cabinet.”

** Brexit deal EXPLAINED: What is Theresa Mays Brexit deal? What is the draft agreement? **

Here is the resignation letter in full:

“There is no more important task for this Government than delivering on the United Kingdoms decision to leave the European Union. This is a matter of trust.

“It is about the future of our country and the integrity of our democracy.

“The deal you put before the Cabinet yesterday does not honour the result of the referendum. Indeed, it doesnt meet the tests you set from the outset of your premiership.

“Repeatedly you have said that we must regain control of our money, our borders and our laws and develop our own independent trade policy.

“I have always supported you to deliver on those objectives.

“Even after Chequers when you knew I shared the concerns of a very significant number of colleagues, I believed that we could still work collectively to honour the will of the British people and secure the right outcome for the future of our country.

“This deal fails to do this.

“The proposals put before Cabinet, which will soon be judged by the entire country, means handing over about £39 bn to the EU without anything in return.

“It will trap us in a customs union, despite you specifically promising the British people we would not be. It will bind the hands of not only this, but future Governments in pursuing genuinely free trade policies.

“We wouldnt be taking back control, wed be handing over control to the EU and even to a third country for arbitration. It also threatens the integrity of the United Kingdom, which as a Unionist is a risk I cannot be party to.

“The British people have always been ahead of politicians on the issue and it will be no good trying to pretend to them that this deal honours the result of the referendum when it is obvious to everyone that it does not.

“I cannot defend this, and I cannot vote for this deal. I could not look my constituents in the eye were i to do that.

“I therefore have no alternative but to resign from the Government.

“It has been a huge honour to serve as Secretary of State for Work and Pensions, and I am immensely proud of the part I have played in the record levels of unemployment we have been in all parts of the UK.

“Youth unemployment has halved since 2010, and we now have record number of

“With employment over 3.3million more than in 2010 we have helped 1,000 more people into work each and every day since we took office.

“I am extremely grateful to you for appointing me to the role, and for the support you have given to me, not least in the run up to the budget, ensuring Universal Credit got a much needed injection of £4.5 billion.

“That has made my decision a greater wrench.

“However, in politics you have to be true to the public and also true to yourself.

“Had I stayed in the Government and supported this deal with the EU I wouldnt be doing that.Yours sincerely, Esther McVey.”