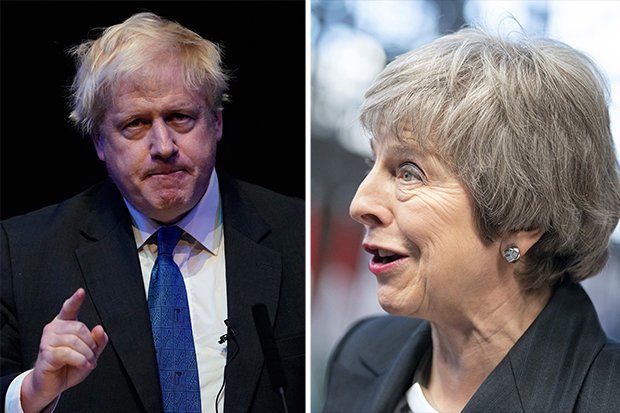 FAVOURITE: The odds put Boris Johnson in the lead to take the top job (Pic: GETTY)

After Mrs Mays victory in the confidence vote last night it emerged she would not stand in 2022, making way after the Brexit process is complete.

The news has thrown spotlight on potential future Tory leaders and Brexit champion Boris Johnson has stormed into the lead with bookies at 7/2, according to Bet Victor.

Sajid Javid is close behind with 5/1 and former Brexit Secretary Dominic Rabb is third with 6/1.

Despite being a prominent figure in the Vote Leave campaign in the 2016, Michael Gove is fourth at 7/1.

Other Brexit big guns are way behind with David Davis equalling Amber Rudd on 14/1.

Mrs May quelled a rebellion within her own party by winning the confidence vote by a margin of 200 to 117.

The PM was all smiles as she arrived at Downing Street, apparently confident she had done enough to convince Tory MPs to back her and save her political skin.

Speaking outside No. 10 later on, a visibly rattled Mrs May she would get on with her "renewed mission" of taking Britain out of the EU after a “long and challenging day”.

“I am pleased to have received the backing of my colleagues in tonights ballot,” she said.

“While Im grateful for that support, a significant number of colleagues did cast their vote against me and I have listened to what they have said.

“We now need to get on with the job of delivering for the British people and building a better future for this country.”

SURPRISE: Some Brexit heavyweights were behind (Pic: GETTY)

SURVIVED: Theresa May managed to keep her job despite the challenge (Pic: GETTY)

In a blow to Tory rebels, her leadership cannot be challenged for another year under party rules, buying her more time to take Britain out of the EU on the terms of her deal.

Mr Johnson blasted failures in Mrs Mays government, speaking on the BBCs Andrew Marr Show, slamming her Brexit plan for leaving the UK “a diabolical negotiating position” and giving the EU the chance to “blackmail” Britain.

Setting out his alternative vision, he said the UK should not pay the promised £39 billion divorce bill to Brussels until the UK is allowed out of the backstop and a future trade deal is agreed.

“That is the way to put a tiger in the tank,” he said.