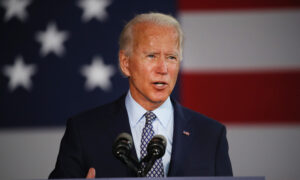 Presumptive Democratic nominee Joe Biden said Friday that he is receiving intelligence briefings and on that basis, he warned that adversarial state actors were trying to meddle in Novembers presidential election.

Biden made the remarks during an online fundraiser for his campaign, during which he identified two countries by name that he said were trying to interfere in Americas democratic process.

“We know from before and I guarantee you I know now because now I get briefings again. The Russians are still engaged in trying to delegitimize our electoral process. Fact,” Biden said, adding, “China and others are engaged as well in activities that are designed for us to lose confidence in the outcome.”

The White House and National Security Council didnt immediately respond to requests for comment on Bidens statement. Reached by phone, a Biden spokesperson did not immediately provide further details.

Biden said earlier that, as of June 30, he was not receiving intelligence briefings, which he was privy to when he served as Vice President under Barack Obama. Traditionally, intelligence briefings are provided to major-party nominees once they win the primary. Biden is widely expected to shed the “presumptive” designation once he becomes the formal nominee at the Democratic convention in August.

The Office of the Director of National Intelligence (ODNI), as the coordinating authority for the nations intelligence services, is leading the effort to mitigate foreign threats to Americas elections. The Washington Post recently reported that ODNI has, in recent weeks, begun briefing presidential campaigns and major national parties on these threats.

“The ODNI works across the intelligence community to ensure that our threat information is consistent and clearly communicated to a broad base of customers,” the agency said in a statement. “The IC continues to warn on our adversaries intent, capabilities, and operations that may affect our ability to defend against interference.”