The European Parliament on Thursday confirmed replacements for two of the three nominees for the new Commission that they had rejected after an earlier round of hearings last month.

They approved French businessman Thierry Breton for an expansive portfolio overseeing the internal market, industrial policy, defense and space, and Romanian MEP Adina-Ioana Vălean for the transport post. But MEPs refused to approve the Hungarian nominee, Olivér Várhelyi, to be commissioner for neighborhood and enlargement policy, insisting that he answer additional written questions by Monday.

Parliaments refusal to give Várhelyi a green light leaves von der Leyen, the Commission president-elect, in continuing limbo for at least a few more days, though her transition team continued to express cautious confidence that Várhelyi would be approved and that the entire Commission could be voted into office by Parliament during a plenary on November 27.

“After todays hearings, theres a certain sense that things are starting to take shape, with all due regard for institutional processes,” von der Leyens spokesman, Eric Mamer, said.

“Under Boris Johnson, Britains reputation in Europe lies in tatters. We should be leading in Europe, not leaving” — Caroline Voaden, leader of the Lib Dem group of MEPs

But even as von der Leyens team voiced growing optimism that she would finally take control of the executive suite in the Berlaymont at the start of next month, officials across the EU institutions were scrambling to deal with yet another uncertain variable. The U.K. government wrote to inform von der Leyen that it would not put forward a Commission nominee until after a national election on December 12 — despite Londons commitment to do so as part of the deal last month that extended the Brexit deadline to January 31.

On Thursday evening, Commission officials announced that they had launched an infringement procedure against Britain, essentially the start of a long legal process intended to force London to meet its obligation. But it was largely a legal formality given that infringement proceedings can typically take many years to yield a result, and U.K. Prime Minister Boris Johnson is still aiming for his Conservative Party to win the election and take the U.K. out of the EU.

In addition to the infringement process, EU lawyers were scrambling to reach consensus on steps that could be taken to allow the von der Leyen Commission to take office with the British seat empty, while insulating the EU from any legal challenges to the Commissions legitimacy. Such claims theoretically could create a court challenge to any legislation, regulation or other action taken by the Commission, though officials expressed confidence that they would find a work-around.

One Commission official said that the immediate goal was to build the strongest possible legal case, to demonstrate to officials in all of the EU institutions that every conceivable step had been taken in order to press the Brits to put forward their nominee. If London continues to balk, the official said, the expectation was that the institutions would have confidence to take any further legal or administrative steps needed to authorize the Commission to take office without a British commissioner. 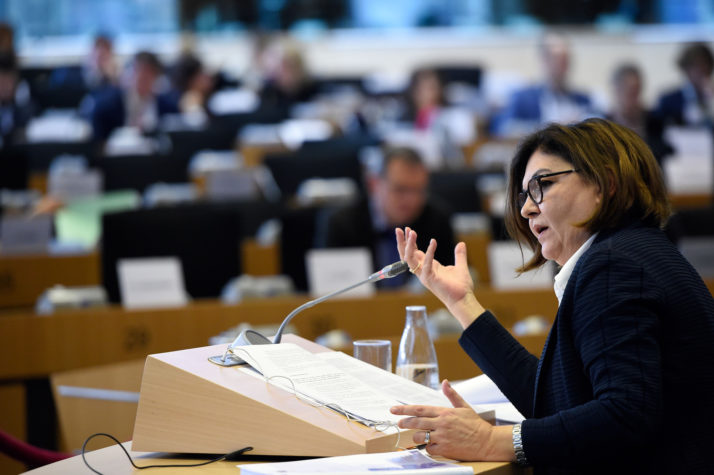 Many EU officials said they were hardly surprised by Londons position.

But Caroline Voaden, leader of the Liberal Democrat group of MEPs, seized the moment to slam Johnson for failing to keep his commitment.

“Under Boris Johnson, Britains reputation in Europe lies in tatters. We should be leading in Europe, not leaving,” Voaden said. “A U.K. commissioner would ensure we are treated as equal partners as an EU member state and fully represented in Ursula von der Leyens new Commission. Boris Johnson should urgently consult with other parties and propose a candidate capable of furthering the interests of the EU as a whole.”

While much of the focus in Brussels shifted to the British question, officials were also not taking the unfinished business in Parliament for granted.

Várhelyis confirmation was blocked after a surprise rebellion by MEPs from the center-left Socialist & Democrats group and from the liberal Renew Europe group, who joined with others to block the nominee after a three-hour hearing in the Foreign Affairs Committee.

Officials in Parliament, however, said they still expected Várhelyi would be approved after answering the additional questions demanded by the S&D and Renew, as well as MEPs from the Greens and the United Left/Nordic Green Left.

Several MEPs across the political groups expressed growing exhaustion with the confirmation process and a desire to get the new Commission in place so that legislative work could restart in earnest.

Many MEPs had voiced misgivings about giving authority for neighborhood and enlargement policy to Hungary, given Prime Minister Viktor Orbáns pattern of disregard for many foundational EU principles of democracy and rule-of-law.

But while the MEPs were insisting on further statements from Várhelyi intended to assure them of his commitment to act independently of Orbán, Parliament officials acknowledged that there was not much reason to reject Várhelyi other than his nationality. Currently Hungarys ambassador to the EU, Várhelyi is a career civil servant with no formal affiliation to Orbáns Fidesz party.

And while he is nonetheless viewed as an Orbán loyalist, any replacement nominee would also come from Orbán, so rejecting Várhelyi would serve little purpose other than to further delay the investiture of the new Commission.