In a conversation with RT State Duma MP from the Crimean city of Sevastopol, Dmitry Belik, said he doubted the existence of the unnamed sources from which Petro Poroshenko reportedly obtained the information about the alleged Russian plans to use disinformation and hacking to influence the upcoming elections in Ukraine.

“I wonder where the Ukrainian president got this information. Perhaps, from some informed sources across the Atlantic?”

Belik added that the state of Ukrainian social networks was so poor that there was simply nothing to hack in this country and all Russian conventional mass media had been long banned and blocked in Ukraine.

Russian senator Vladimir Dzhabarov added in comments with RT that the false accusations of meddling voiced in Russias address had already become a tradition in certain countries. Dzhabarov also said that in his opinion Poroshenko understood that his chances for re-election were extremely slim and tried to pre-emptively explain his looming defeat by the invented Russian involvement.

This is absolutely foolish. We are not interested in what he is doing there or who they elect. Ukraine lives by itself and let it live on. The most important thing is that they observe the Minsk Accords and the residents of south-eastern Ukraine did not suffer from permanent aggression.

The Minsk Accords is the 2015 agreement on settlement between Kiev and self-proclaimed republics of Donbass signed by representatives of Ukraine, Donetsk and Lugansk republics, Russia and OSCE and negotiated by leaders of Russia, Ukraine, Belarus, Germany and France. 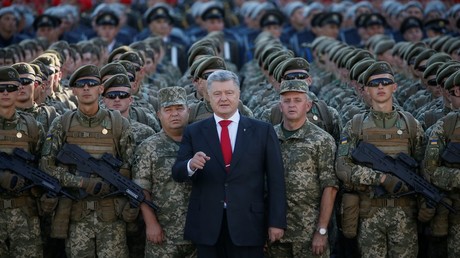 Some Ukrainian politicians share the opinion that Poroshenko simply uses the invented Russian threat to distract the voters from the disastrous situation in Ukraine. One Ukrainian MP from the Batkivshchyna (Fatherland) party told RT that this was a tried-and-tested tactic in todays Kiev.

“This is a no-lose scenario. They explain any problem in the country by the alleged Russian meddling. But maybe we should accept the obvious? The population is not content with the work of the countrys leaders as the country has encountered poverty, unemployment and gang rule,”

At the same time, a representative of the Popular Front party said that such tricks were unlikely to work under current conditions. The politician told RT that ordinary Ukrainians understood that they were being manipulated and simply had grown tired of the constant narrative mentioning the alleged Russian threats and meddling. The source also agreed with the theory that the current Kiev regime was preparing for major losses by inventing excuses that would explain them.